This interview with John Y. Lafferty of CFO-Pro explores some of the most beneficial services he offers his clients. John is one of the most experienced Interim CFOs in the country. We’re going to be talking about CFOs and start-up businesses in general and how you get involved in starting up a company properly with proper financial support.

Interviewer: Today we’re going to be talking about this whole idea of outsourcing a CFO. First of all, give us a little background about your business. First of all, how did you get into this business, and did you always want to be a CFO?

John: I started my career in public accounting with Arthur Andersen. I had no idea that I would eventually be a CFO type, but after a number of years there, I went into venture capital, which at the time was the largest institution VC firm in the country. After several years there, I decided to peel off in the industry and be the financial guy and was in a number of privately-held enterprises. I also had the opportunity to run some businesses during that time. Eventually, it became pretty clear to me that the hours I was putting in on a salaried basis were just too much, so I thought ‘why don’t I go out on my own, do what I do, what I knew how to do best and provide financial management services to business owners.’ That’s what I’ve done.

Interviewer: It’s interesting because a lot of companies go out and they’ll hire a mediocre CFO and they’ll pay them full time and they really don’t need that; they need somebody focused on the most important things. Maybe you can give our audience a few tips on what’s there to be appreciated when it comes to high-quality CFO services and how can a fractional CFO person like yourself really get a company properly on track?

John: I’m going in and focusing on what is bothering that business owner; what does he feel his key issues are on the financial side of the business. One of the things that they don’t pay any attention to is break-even sales. They don’t know ‘at what point do I have even sales to cover all of my expenses.’ Beyond that, that becomes profits. They don’t understand the formula nor how to calculate it. That’s something I can help them with within a matter of minutes because when I look at their P&L statement, I can quickly see that there may be some line items that are misclassified. They’re going to need to be above what they call the line or below the line; that’s the gross profit line. Once they’ve understood that, then I say let’s assume you wanted to spend $10,000 on a marketing initiative, the same formula is going to answer the question ‘how much in sales do I have to generate to cover that cost.’

I also look at how many days of sales are in accounts receivable and also in accounts payable. The larger that gap is, the tighter their cash flow is. If they’re collecting receivables in 70 days and paying vendors in 30, that’s a wide gap and so I encourage them to chase those receivables, get that down to 45 days, stretch your vendors a little bit, maybe up to 40 days. There’s one other item that I point out and the way I approach it is let’s assume you can improve your margin by 1% and if you got $10 million in annual sales, that 1% is worth $100,000. If you improve that margin by 1%, that’s $100,000 to your bottom line. Maybe you don’t need it in the business or you take it out and invest it elsewhere. That’s a key thing to begin to understand in terms of watching your margins, managing them, and knowing what it really means to do them.

Comments Off on What is a Virtual or Interim CFO? Many CEOs wade through a lot of unnecessary financial detail that clutters their thinking and eats up time.

What the CEO really needs to see are sales figures and gross margins. They tell him or her the amount left over to cover the overhead and produce a profit for the owner.

If the average monthly overhead-to-sales percentage is moving up, the company better be generating more sales to cover overhead, or know the reason why it‘s not. In short, if the numbers are moving in ways unfavorable to the company, the CEO can begin to identify the problem and take steps to address that issue.

The worksheet design can be tailored to the company using the spreadsheet’s capabilities. When working with a company, my discussions with its CEO and my analysis of current financial statements will help me shape this monthly financial report into a format easily understood by the CEO.

Moreover, I can walk him through the way I designed the worksheet and how I interpret its numbers. That will allow the company to create the same kind of worksheet, month by month and year by year. That CEO will sleep better at night, because he understands what he’s looking for when reviewing those month-to-month and year-to-year worksheets.

If you would like help replacing one-inch financial reports with easy-to-peruse month-to-month worksheets, please contact me. I offer a 100 percent guarantee on my work. I take on only clients I can help. Call me and let’s talk about your business. My phone number is 630-269-7646.

Comments Off on How To Create Clean, Lean Monthly Financial Reports

How to generate a financial report that provides better financial insights

I was invited to breakfast one morning by a CEO of a food service company. She came to the table armed with an inch-thick sheath of papers, and told me the stack represented her controller’s financial statement.

“This is too much to deal with,” said the successful businesswoman. “I can’t make heads or tails of it. And you know what? I receive a financial report like this every month!”

I told her I’d take the stack back with me, and return with a financial tool presenting the data in an easier-to-absorb format. At our next meeting I handed her the month-to-month worksheet I’d designed and said, “Rather than going through a dozen of those inch-thick stacks every year, let’s take the critical top-side income statements and line them up month-by-month on this one sheet of paper.”

Before delivering it to her, I’d dropped in the April numbers to serve as a guide, with the other columns remaining blank. I told her to give that worksheet to her controller, and have him complete it month by month.

Saving Time for the CEO

The worksheet was designed to display the actual numbers reported and the numbers that had been budgeted for the month. She had 25 different operating units, all of them captured in columns on her spreadsheet. She could skim across those 25 columns and quickly see how her company was doing.

Using this important financial tool made the CEO more productive. First, she saved time, because she no longer had to wade through inch-thick monthly reports. Second, she had crisp financial reporting that indicated specific, targeted issues to discuss with management.

Deeply appreciative, she said, “Y’know, after all these years of being in the food service business, I finally understand what my numbers are telling me.”

In my next blog, I’ll explain how this time and labor-saving financial tool can be created for your own company. 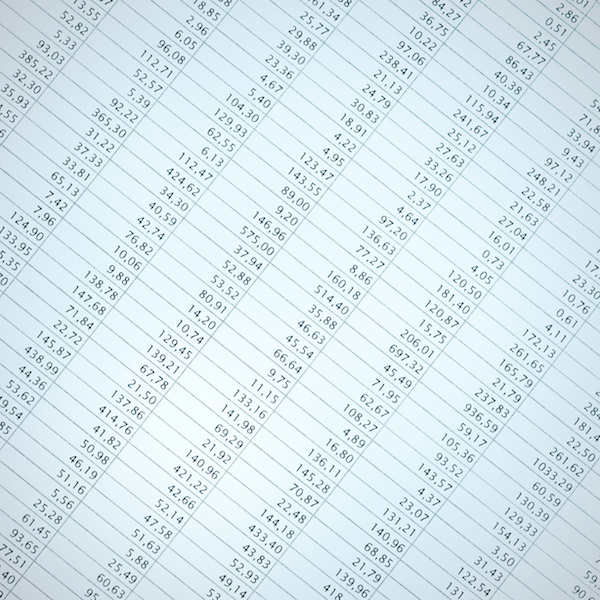 In our last issue, we showed how TTM could be used to track sales growth throughout the year regardless of seasonal or other variations. You can use the same process to track month-by-month trends in gross margin and operating expenses.

If you are concerned about the instability of gross profit, a Gross Margin TTM is the best way to spot it. To calculate the numbers, look at monthly gross profit and sales over the past 3 years. Calculate a rolling annual total of both for each month. Then divide each month’s profit total by the same month’s sales total expressed as a percent.

If you suspect overhead is eating at your profits, take the rolling annual total of operating expenses divided by rolling sales total each month. You’ll soon see if you need to draw the line on spending.

In each case, chart your numbers and look at the trend line. If it’s moving laterally or down, you’ve got a problem. TTM helps you eliminate guesswork and excuses and start working on solutions to profitably grow your business.

A CEO recently told me his company’s sales fluctuated from month to month. He was concerned because he could never tell if they were making progress in sales growth until the end of the year.

This is just the type of situation that calls for the Trailing Twelve Months (TTM) tool. When you look at revenues month to month, normal business cycles can hide trends-either positive or negative. With a TTM you can easily spot trends, especially in revenues.

A TTM is a rolling annual total tracked monthly. Each total (or point) covers the previous 12 months and is, therefore, comparable to every other point. So a TTM is a moving measurement of the past year.

Because a TTM eliminates seasonality, charting it will show you at a glance if your numbers are moving in a positive or negative direction. If the numbers trend downward, it’s time to investigate and find out why.

Using Your Own Trailing Twelve Months

Take a look at your monthly revenue history over the past 3 years and calculate a rolling annual total for each month. Chart the totals and look at the trend lines. Did you notice the trends at the time? If not, give some thought to possible causes and ways to take corrective action in the future.

Continued use of TTM will keep you on top of critical numbers as your business changes and markets shift.

Comments Off on The "Trailing Twelve Months" Tool
Scroll To Top